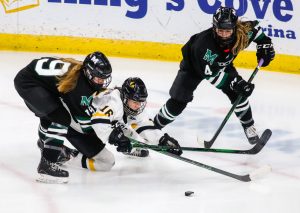 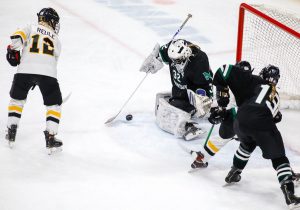 Proctor-Hermantown upset the higher seed Warroad to earn their first trip to the State Class A title game after six appearances and their fifth since 2014.

Proctor/Hermantown, which came into the tournament as the No. 3 seed, defeated No. 2 Warroad 3-1 to advance to the Class A championship game.

Abby Pajari was named Player of the Game with 31 saves.  She has a 0.83 goals-against average and .954 save percentage while helping the Mirage notch nine shutouts this season.

Warroad (20-2-0) got on the board first when senior forward Abbey Hardwick batted in a rebound from junior forward Maddie Lavergne at 5:24 of the first period. The Warriors’ lead held until 16:59 of the first, when freshman forward Hannah Graves scored after a brief scramble in front of the net.

Graves didn’t wait long to net her second goal. She caught a spot-on pass from senior forward Michaela Phinney at 3:39 of the second period and beat junior goalie Kendra Nordic with a picture-perfect shot from the left circle. Senior forward Alyssa Watkins pushed the Mirage’s lead to 3-1 less than three minutes later, with an assist coming from senior defenseman Kaydee High.

No goals happened in third period, but it was exciting.  Abby P was named Player of the Game.

While Proctor-Hermantown came to play Warroad outshot the Mirage 23-18. Face off wins were nearly equal with the Mirage winning 24 of 23.  Each team had four penalties.

The Mirage was also able to capitalize on one of three power plays.

Proctor/Hermantown (20-0-0) will face either Gentry Academy, No. 1 seed, or Chisago Lakes in the title game. The championship is scheduled for Saturday, April 3 at 11 a.m. 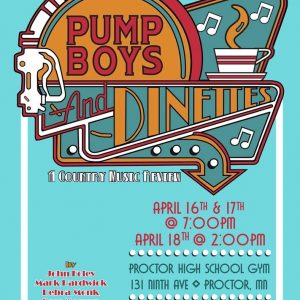 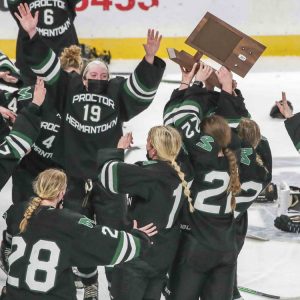